We are always looking for stories of you and your MGB,
please let us have these to add to future eNewsletters.
Enjoy your MGB.
Regards
John

This year’s MG Live started on the Friday for Neil, Clive, Chris and I as we wanted to set up our site ready for the Saturday rush. Chris had been at Silverstone from the Thursday helping Jim Andrews and the other volunteers setting up all the signs etc needed to run the event.

Saturday started at 7am for me when I left home in Abingdon to get to Silverstone for 8am, already MG’s were arriving on what turned out to be a very busy and hot day. In addition to the MGB Register marquee we had the Marathon MGB to display with Doug Samuels BL Special Tuning Transporter. 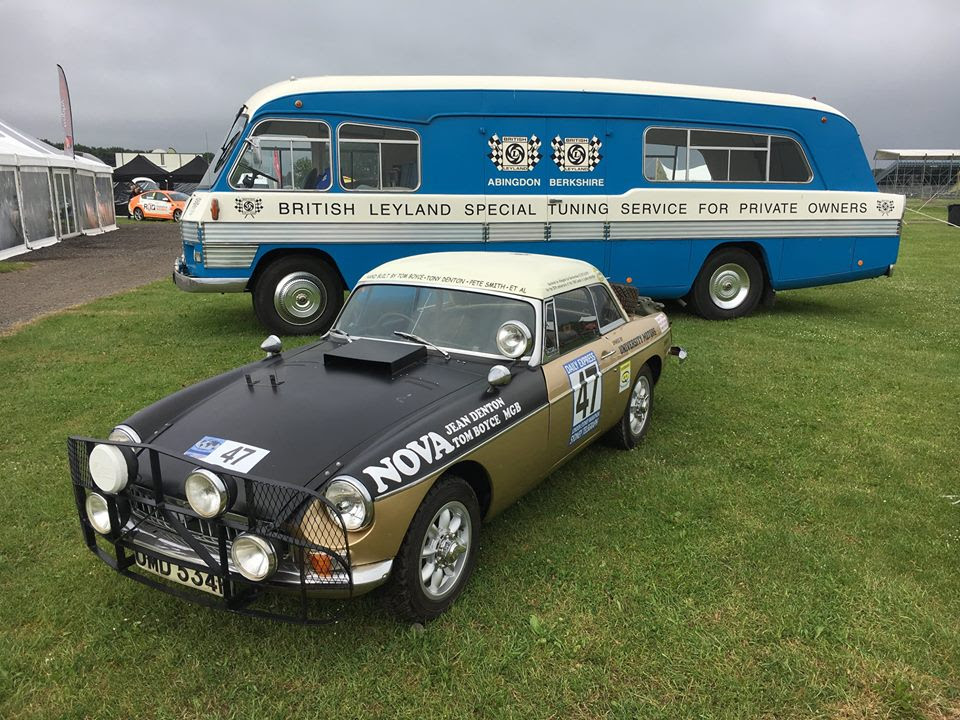 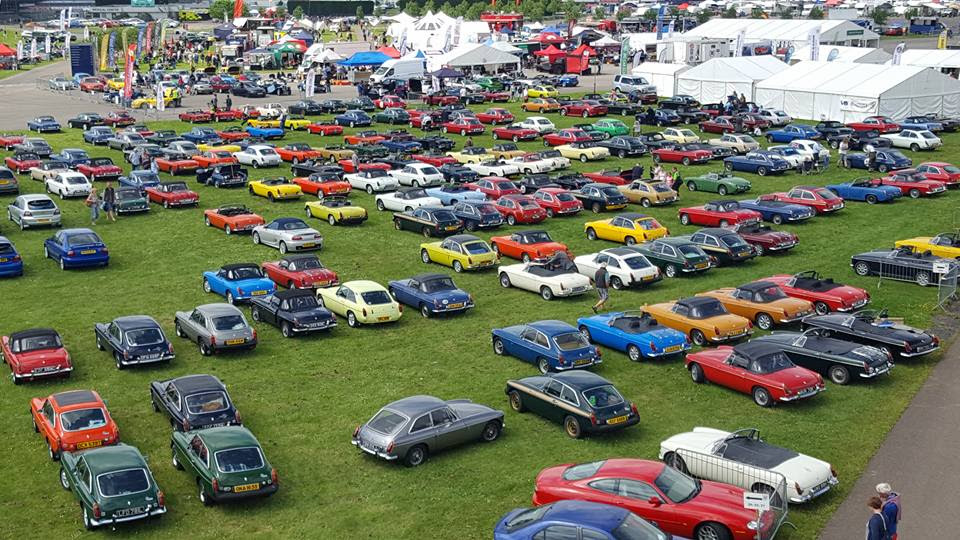 Neil had organised a good rota for the Saturday and the Sunday to man the stand and to control the MGB Register parking, on the Saturday we ran out of space to park the B’s so later arrivals had to go on the MGC and Midget location.

We dressed up Robin Cloke’s red MGB to be an Old Speckled Hen MGB look alike as the original one had to be at another event, Greene King always support the Marshalswith cans of OSH and donated some OSH chutney and glasses to the Marathon MGB raffle that we held and made £204. 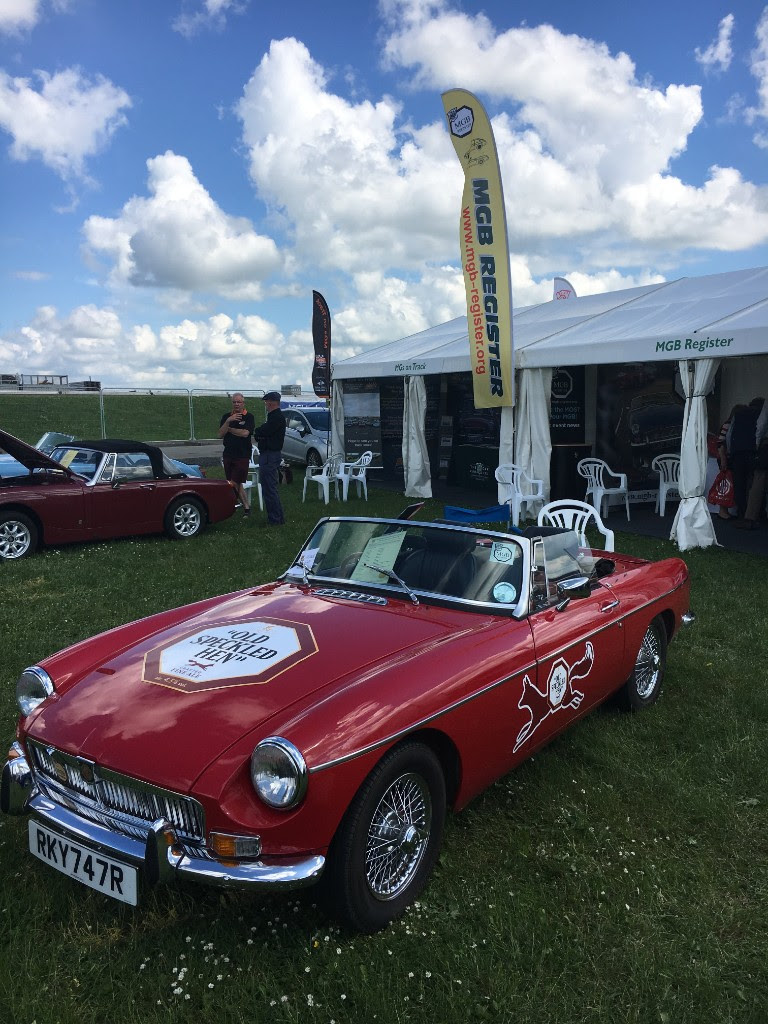 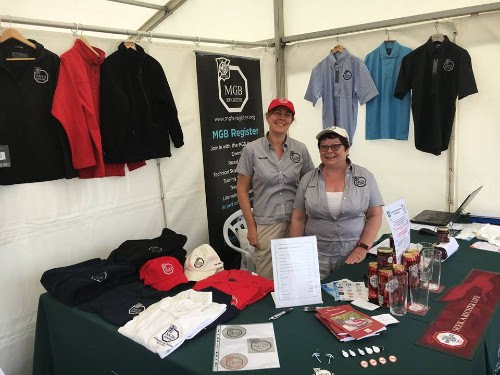 This year it was good to have some new helpers on the stand they were Mellisa, Ellie, Michelle and Lorna, all worked hard over the weekend.

NOTE FROM THE REGISTRAR

The new layout seemed to improve the flow of visitors from previous years.

We had 6 new members join the MGB register and many more enquiries and updates about cars on the register.

We were able to assist one visitor whose MGB was running so badly he didn’t think he would get home. Geoff got it running better with a new set of plug leads and some oil in the dashpots – both items readily available on the trade stands. So we hope he got home ok.

Many of us who attend the regular ‘Sunday Scramble’ meetings were curious to know more about this ex RAF base.

Bicester Heritage kindly arranged a guided tour for the MGB Register. Our host was Mike Lousada an RAF Officer who had himself learned to fly at the base at the beginning of his career.  After Coffee and Croissants, Mike gave us a brief talk and the all important Health and Safety warning – “if you see a vintage Bentley racing towards you, jump out of the way!”

The first plane landed here in 1911 and the base dates back to 1916 as a Royal Flying Corps airfield. It was further developed in earnest in the 1930’s as the threat of war emerged.

Recently it narrowly escaped demolition to make way for housing. Thankfully an investment consortium saw the historic value and potential of the site and managed to persuade the government of their vision. Now listed of Historical Importance, the derelict buildings are being restored and occupied by businesses specialising in engineering and craft skills for classic and vintage cars, while light aircraft, gliders and vintage planes continue to fly from the airfield.

We were able to visit many of the Business Units, among them, Kingsbury Racing with some wonderful pre-war Bentleys and two companies run by John Lomas – MG Automobile Company and Blue Diamond Services. John explained that the Apprenticeship Scheme at Bicester Heritage was crucial in his decision to move here as skilled young people were in short supply.

We also visited Heritage Engineering who specialise in manufacturing obsolete components and gears for all kinds of vehicles. They showed us some work they were doing for the restoration of a World War II Tank.

One of the hangars is being used for car storage for a priceless number of exotic cars. As a World War II RAF Base the course is identical to Silverstone. Many of the cars have to be given a run out from time to time. We asked but there are no vacancies for that job!  Another hangar is being used for the storage of historic vehicles used for Film and TV.

Our thanks are due to Mike Lousada, our excellent guide and to Tiggy Atkinson for organising the tour. Thanks also to John Watson and Jayne Bull for the photos.

If you are interested in visiting the site, the Flywheel event is coming up on the 23rd and 24th June. You can join us at the next Scramble on the 7th October and we hope to arrange another guided tour in the spring next year. 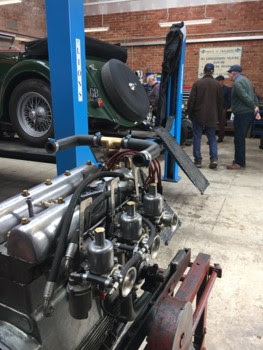 The next outing for the Marathon MGB is the Flywheel event at Bicester Heritage on 23rd & 24th June where it will be displayed with other Marathon and World Rally cars to promote the event at Gaydon on 29th July.

MGB Register Lecture Saturday 22nd September
We have just had confirmation the Irish lady rally driver who competed in the 1968 London to Sydney Marathon, Rosemary Smith, will be joining  with Paddy Hopkirk and Alec Poole to tell us about their experiences on the event.